April Doepker is a Metis artist born and raised in Saskatchewan. From an early age April expressed herself through painting and while studying fashion design in Montreal she gained an appreciation and respect for street art. Being inspired and befriended by urban street artists has led April to become immersed in stencil art claiming that spray paint is one of her favourite artistic mediums. April has worked at SCYAP since 2008 as the Sign and Design Manager, she uses her creativity to provide clients with unique graphic design services such as logo, poster and sign design as well as sign creation. April also facilitates graffiti and stencil workshops for school groups and is one of SCYAP’s valuable mural painting team. Since 2009, April has curated an annual art showcase at the SCYAP Art Gallery for graffiti and urban artists, called “We Needi Graffiti”. In addition to all this April is a sought after commissioned artist who creates everything from private murals to stencil work portraits, on top of that she also has an Esty shop where she sells miniature food inspired clay jewelry. 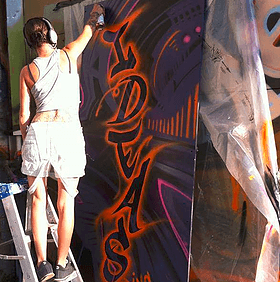