Jordan Schwab, originally from Prince George, BC., holds a BFA from Thompson Rivers University,(2005), and received his MFA from the University of Saskatchewan,(2009). Through a previous career in commercial and industrial construction, he developed an interest in constructed environments, entropy and collective work to form the basis for his art practise. He has exhibited across the country, having been included in shows at SKOL Gallery in Montreal, SNAP Gallery in Edmonton, Martha Street Studio in Winnipeg, Kamloops Art Gallery and AKA Artist Run and PAVED Arts in Saskatoon. He has worked with the SCYAP Team as the Urban Canvas Project Art Coordinator since 2009, in addition to this he runs JK Professional Services, providing contract work to various galleries and individuals and he is a sessional instructor at the University of Saskatchewan. 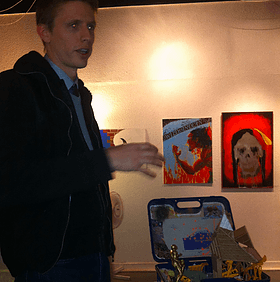